The more time you spend in it, the more time you start to realize how weird it is to try to squeeze the region that is the Middle East into one geographical and cultural label. Few places are better guaranteed to burst the expectation bubble you carry with you to the Middle East than Lebanon. You may go in expecting Arab bazaars and crowded streets, but you’ll leave with a sense of culture and natural adventure you thought you’d only ever find in western Europe. In an age when access and stability to the Middle East seems to be on a steady decline, Lebanon remains a crown jewel of the Middle East in terms of experiencing art, culture, and adventure in relative safety.

Lebanon is a country of variety, and as such, if you are really adamant about experiencing it in its fullness, you’re going to have to make the circuit from mountains to the sea, and to the city for the full experience of the real Lebanon.

While I was in Lebanon, a taxi driver proudly told me that this was the only place you can see the sea and snow at the same time. I gave a quick glance to the east and found ample reason to believe him. Rising up almost immediately to the east of the coastal city of Beirut, the Lebanese mountains protrude stocky and proud as they span the country in its entirety from the north to the south. They carry an air of gentle ruggedness, and within the confines of their rocky domain they guard some of the most pristine natural treasure of Lebanon.

A trip to this country is sorely sold short without a trip into the Lebanese Mountains. A quick and cheap two hour bus ride from the centre of the city is more than enough to get you out of the hustle and bustle of urban life and into a new setting that boasts a night life of stars and constellations instead of clubs and loud music. The mountains house an intricate network of connected villages living a calm rhythm of simplicity with quaint cafes, aromatic bakeries, and some of the friendliest people east of the Mediterranean.

It’s easy to fall in love with the villages dispersed throughout the mountains, but resist the temptation to trap yourself in their simple paradise. Lace up a sturdy pair of hiking boots and hit the trail instead. Lebanon is actually experiencing somewhat of an outdoor sports awakening, and accordingly is funnelling resources into developing pristine nature reserves geared towards environmental protection, social progression, and experiencing the outdoors in their fullest.

One of the best Lebanon has to offer right now is the Shouf Bio Reserve, which boasts over 250km of trails winding their way through ancient cedar, oak, and pine forests equipped with views to leave even the most well-travelled hikers at a loss for words. Hiking your way through Shouf is the best way to experience the quiet villages, ancient ruins, and pristine nature the mountains of Lebanon have to offer. Hike until your hearts content, then crash in a village guest house for the night with a belly full of delicious local cuisine and a cultural experience unlike any other.

After you’ve hiked to your hearts content, the transition to the next part of the Lebanon circuit is simple enough. Get a taste of the coastal life of Lebanon through its historical, yet bustling fishing town of Saida. If you’ve been in the Shouf Reserve in the mountains, odds are you’re going through Saida on the way back to Beirut, so you might as well get out and enjoy it anyways. Once you find yourself lost in ancient markets and enraptured in the beauty of the Mediterranean coast, you’ll be glad you did.

The great thing about Saida is that it doesn’t matter if you have two days, or just two hours, the city has something to offer any traveler on almost any budget (believe me, I spent 5 hours and zero dollars there and still had a great time!). Let’s start with the obvious, food! Saida is a port town, which means an abundance of fresh and delicious fish! Lebanon already boasts a pretty amazing cuisine, but in Saida seafood restaurants are right there competing with the savory flatbreads pumped fresh out of bakeries and the usual dives featuring roasted chicken and grills.

Apart from the food, Saida boasts an incredible historical heritage that the traveler and history buff alike will appreciate. From ancient, yet still functioning, French academies, to crusader castles and ancient souks (markets), Saida is one of those cities that it just feels right to get lost in. If that does happen, don’t panic! Just head west, and once you hit the ocean make sure to enjoy that as well.

After trekking the mountains and soaking up the coast in Saida, don’t be shy about heading back into the fray that is Beirut for the final stop on the Lebanon circuit. The mountains have their quiet elegance, the sea its historical beauty, but Beirut boasts the culture and night life you won’t find anywhere else in the Middle East.

Beirut has all the typical sights and sounds one would expect in a city. So if you’re into museum diving, a park or two, and a lively night life, you won’t be disappointed. However, you’re in Lebanon, so your time is best spent finding the things you can’t find anywhere else.

For that, you can’t go wrong with heading down Armenia Street near the center of the city, and to the actual Armenian district beyond it. Armenia Street boasts an assortment of modern art exhibitions, trendy cafes, and unique restaurant that further help express the heart and culture of Lebanon. Beyond the street itself, in the neighborhood of Bourj Hammoud, you’ll find the actual Armenian district. Here the ancient and unique culture of Armenia is proudly displayed and expressed through everything from shops, restaurants, and displays, and are sure to give you a glimpse into a world you you’d be hard pressed to find anywhere else.

I’ve gotten the chance to visit and live in a few places in the Middle East. Lebanon, by far, has been one of the most surprising I’ve encountered. I’m not sure what I was expecting, but the variety, friendliness, and uniqueness of the country definitely has me wanting (and planning!) to come back for more! 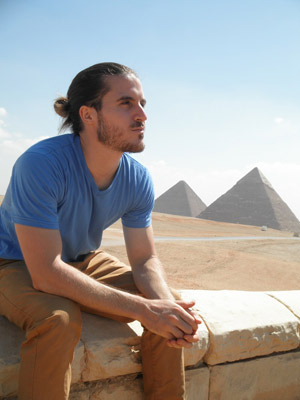 "David is forever a linguist in training working with Arabic and currently striving for something between fluency and just being able to converse about the wonders of peanut butter with his friends in Cairo. He dreams of being like Milo Thatch, and sometimes puts his musings here (www.dstack.co)."
Advertisement