The Laguna Colorada is located in the Andean plateaus of Bolivia, just southwest of it. It is within Eduardo Avaroa Andean Fauna National Reserve near the Chilean border. It is a 60-square kilometer shallow salt lake with white borax islands that provide good contrast to all that red water. The shoreline is also bordered by white deposits composed of gypsum, sodium, borax and magnesium.

Why is Laguna Colorada red

The lake is famous for its brilliant and unique coloration – bright red due to the algae that exists in abundance in its waters. Such phenomena also occur in other areas, such as in the Arctic islands in Canada. These lakes also have a pastel rainbow of colors, depending on the algae in the lake or lagoon.

Laguna Colorada's unique red hue has earned it a place as part of the Ramsar Wetlands of International Importance. The lake was included in 1971, during the Ramsar Convention. 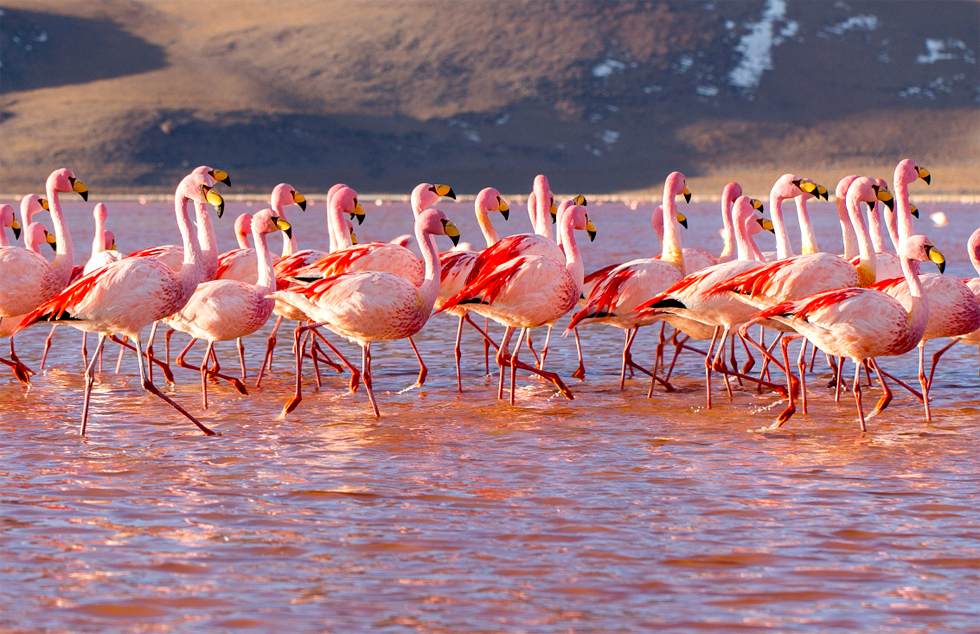 Flamingoes in the Laguna Colorada

Laguna Colorada is also home to a variety of flamingoes – Chilean, James (also called Puna), and Andean flamingos come here to breed. Thousands of them congregate in the lagoon, making them one of the most important breeding places for flamingoes, particularly the James flamingo. The flutter of pink over the red colors is a delightful sight. You can only distinguish the different species by their special characteristics. The Chilean flamingo has blue legs, a black-topped white bill and red knees. The Andean flamingo is the largest and has black and yellow bills as well as yellow legs. There is also the James flamingo, which is the smallest. The James flamingos and the Andean flamingos are among the world's rarest flamingos in the world. There is also very little information about them, as scientists are only beginning to study these species. These flamingos feed on the algae and brine shrimp in the lagoon.

A visit to this spectacular area is quite an experience. After all, it sits at an altitude of over 14,000 feet. The cold winds make breathing and other simple tasks a challenge. You will almost envy the flamingos their stamina as they survive and even seem to thrive in such harsh environments.The lake is located around 150 kilometers south of San Juan. The area is also near several other colored lagoons. Thus, the Laguna Colorada is usually part of a tour package that explores this beautiful, though perhaps surreal, part of Bolivia.When visiting Laguna Colorada and the other colorful lagoons, be sure to bring a flashlight, some change (coins and small bills to pay for the bathrooms), some water, sunblock and sunglasses and warm clothes. A hot water bottle will also be helpful in warding off the freezing temperature, particularly in the evenings.

The Laguna Colorada has a standard rating score of 7.8 .