Located in between the Pacific and Indian Oceans, Indonesia is the largest archipelago in the world, spreading over an area of eight million square kilometers. Between the 1700s and 1949, Indonesia was once a colony governed by the Dutch. It had finally gained its independence in 1949. For a time, it had been succumbed to a military regime. The voice of its people had finally ended this regime after 30 years, and in 1998, the country held its first general democratic elections.

Indonesia is made up of a total of 13,670 islands. Because it is situated in the earth’s tectonic plates, these islands are home to a total of 400 volcanoes, 25% of which are active to this day. As such, the inhabitants of the archipelago experiences frequent earthquakes and volcanic eruptions. One of the most devastating eruptions occurred in 1883 when the volcano in the island of Krakatoa erupted and tore the entire island apart.

The country of Indonesia is home to a people who take pride in their rich cultural heritage. In fact, one of the most popular tourist attractions for those visiting Indonesia are the elaborate puppet theaters located in the island of Java. Tourists visiting the country can’t help but take home some of the exquisite wood and stone carvings as souvenirs of their trip to this colorful country.

One of the driving forces in Indonesia’s economy is tourism. Take one visit to this beautiful country, and you can see why. The five main islands of Sumatra, Java, Kalimantan, Sulawesi and Irian Jaya are home to some of the most pristine beaches in the world. Travelers visiting any of these islands can enjoy a variety of water activities such as diving and snorkeling as the waters are home to spectacular coral reefs allowing a rich and diverse marine life to thrive.

In fact, everywhere you go in Indonesia, you are sure to come across a variety of parks where you can experience the beauty of nature. Travelers can trek through lush tropical rainforests in the many guided tours available to come up and close with a variety of rare plant and wildlife species, such as the Komodo Dragon, which is considered to be the largest lizard in the world. It is highly advisable not to trek through these forests without a guide since these parks are also home to some fierce wildlife species such as tigers and elephants.

If you are visiting Indonesia for the first time, make sure that you do not leave out a trip to Bali, which is considered as the top tourist destination in the entire country. An average of 5 million tourists head out to Bali each year for its sandy beaches and for the beautiful landscape that welcomes you the minute you arrive. At night, Bali comes alive with its spectacular street life where you can sample some of the local cuisine. The food here can be quite spicy as all Indonesian dishes include rich coconut milk and fiery hot chilies. Tourists enjoy these dishes alongside with a hefty bowl of fried rice on the side.

There are no Indonesia articles at this time. 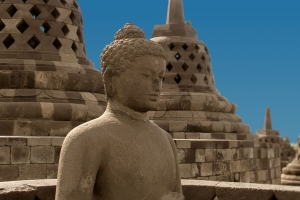