Pacaya Volcano is one of Guatemala's most active volcanoes, as it is almost always in the state of eruption. The Pacaya rises to a height of over 2,500 meters, a wonder surrounded by steam and volcanic gases. Its many attractions also make it one of the most climbed volcanoes in the country.

The Pacaya Volcano is part of the Pacaya National Park, at the southwestern region of Guatemala and near Guatemala City itself. It belongs to a chain of volcanoes that span the area near the Pacific Coast. It has hour peaks, namely Pico Mackenney, Cerro Chino, Cerro Chiquito and Cerro de Agua. The active crater is to be found at Pico Mackenney. This is constantly throwing vapor, ahs and small stones. At times, lava flows out as well. Also, the cone's shape is constantly changing, as a result of the lava and ash piling up every time the volcano erupts.

Hike up to the top. The experience is quite exhilarating – it is getting up close and personal with one of the most elemental forces of nature. Heat and fire at the closest you can get. The view is particularly spectacular at nighttime, when the lava glows a fiery red. You can even peer into the crater.

You can begin the hike at San Francisco de Sales. Before beginning, do try to get more information at the visitors' center located here. That way, you come armed with all the information you need. The hike takes around a couple of hours or so to reach the base of the rim of the volcano. The ascent is quite easy at the beginning. The trail is dotted with simple restrooms, trash cans and rest stops. It is also well-maintained and secured by rangers. However, as you get nearer, you have to contend with mini-rock slides, paths filled with volcanic ash and a steep climb.

Another trail is for those looking for more challenges. It is a harder climb, but it is well worth the effort as the views are more picturesque. When, you reach the summit, you can even have the opportunity to touch the red-hot rocks. The view from the peak is also awesome. You can see the cones of Acatenango and Fuego volcanoes. If you are lucky, you can also see steam explosions – small bombs that shoot up to 100 meters.

Now, the way down is more enjoyable than the climb up. This is a great opportunity for skiing. And many who have tried it will tell you that it is one experience you shouldn't miss.

Be watchful of your shoes, too – as the heat can melt the soles. Thus, boots or hiking shoes are the best options. Be sure to also bring warm clothes, a good hat (preferably with a chin strap), some rain gear (in case it rains), a flashlight and some water. Do not forget to bring some money for your admission fee into the national park.

For the more adventurous, you can also go to nearby Laguna de Calderas, where you can go canoeing, hiking or taking a canopy tour.

To go to Pacaya from Guatemala City, you can head south via the highway going to Esquintla, then turn off at San Vicente before you reach Palin. 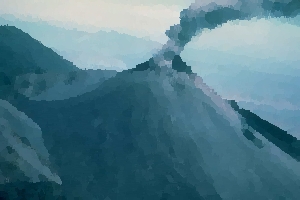 All Ratings
My Rating
Impressiveness /
Cultural Significance
7.6 /10
-
Tourism Crowd Level
Not available at this time