Last updated on February 23rd, 2021
All Ratings
My Rating

The jewel of Moorish Spain and still one of the country's national treasures and major attractions. The palace of Alhambra is the reason that most visitors come to Granada. Built during the Moorish occupation of Spain, the palace's stunning beauty is a reminder that while Christian Europe stumbled through the Dark Ages, the Moors of Andalusia reached unrivaled pinnacles of beauty and culture. It is an oasis of splendor set against the backdrop of mountains and the city of Granada. Alhambra is one of 851 sites worldwide on UNESCO's World Heritage preservation list.

The stunning palace and gardens are seen by only 8,000 people daily, and admission to the Nasrid Palace areas, which include the Lion Court, is limited to 300 people per half-hour block. Because tickets to see the Alhambra are in such high demand, it's highly recommended that you reserve your tickets when you make your travel plans rather than risk being unable to get in. It would be an enormous pity to travel to Granada only to be unable to visit the Alhambra because the tickets for the day are sold out.

What to See at the Alhambra
The Alhambra is divided into four main sections, each of them unique and unforgettable. Within each section, there are beautiful sights to see. The Charles V Palace was built by Charles V after the reconquest of Andalusia by Spain. Its most striking features are the round courtyard and the view of the Alhambra.

Inside the palace, visitors can tour two museums, the Museo de Bellas Artes and the Museo de la Alhambra. Alcazaba is the original fort, the "red castle" for which the castle is named. The Alcazaba stands mostly in ruins but is still impressive, and the views of Granada below are incomparable.

The Nasrid Palaces are the true gem of the Alhambra. Built over the course of centuries by the Moorish sultans and kings, the royal palaces are ornately designed and intricate, offering a taste of Moorish royalty's luxurious extravagances. The walls and ceilings are intricately carved and painted, and everywhere you look, there are fountains, pools, and cascading walls of water. You'll be allowed to enter the Nasrid palaces during the thirty-minute time window stamped on your entry tickets, but you don't have to complete your tour in thirty minutes – which is a very good thing, since there is so much to see within the walls of the sultans.

The Generalife is a less formal palace, replete with vegetable and fruit gardens, fountains, and beautiful pathways. The exquisite gardens are still as lovely as they must have been when the sultans and their wives and daughters enjoyed their respite from the formalities of court life here. The flowers, herbs, fruits – and most importantly, the fountains – all represented the Moorish depiction of Paradise, a fruitful oasis where everything was in flower and fruit.

Tickets and Admission to the Alhambra
Tickets are available for Daytime Visit or Evening Visit. Daytime Visit is further divided into Morning Visit and Afternoon Visit. If your ticket is for a morning visit, you may enter the Alhambra anytime after 8:30 AM and 2 PM. For an afternoon visit, you will only be allowed to enter the Alhambra after 2 PM. Once you are inside the palace, though, you can stay until closing time regardless of the time that you entered. An Evening Visit ticket only allows access to those areas of the Nasrid Palaces open to the public. There are also Garden Visit tickets available during the evening hours. These tickets allow visitors to enter and tour only the Alhambra's main gardens, including the Generalife, the Portal, Alcazaba, and the three gardens of the Alhambra itself.

There are 7,800 tickets available to enter the Alhambra each day. Of these, only 1,800 are available for sale to the general public on the day that they can be used. Tickets may be reserved up to a year in advance through any of the following means: Purchase your tickets online at www.alhambratickets.com Order tickets by phone with your Visa or Mastercard credit card. In Spain, call 902-224-460. Outside Spain, dial the international country code (from the US 011, from another European country, 00), then dial 34-915-379-178. You can make your reservation at any BBVA Bank in Spain.

You can also ask if your hotel can book your reservations for the Alhambra when you book your room. There are 400 tickets set aside daily for guests of various hotels. Your hotel may charge you a few for making the reservation, but it may be the easiest way to ensure that you have tickets to the Alhambra.

If you've come to Granada without a reservation, it's still possible to get tickets. It's just harder, and there's more of a chance that tickets will be sold out by the time you get to the ticket window. Again, the easiest way is to ask if your hotel can make reservations or get a ticket for you. Some of the pricier hotels make a point of holding a few tickets in reserve for exactly that purpose.

Find a BBVA bank branch and make a reservation for the following day at the window.

Finally, you can take your chances at the Alhambra ticket window, located by the Generalife Gardens. The ticket window opens at 8:00 AM, and during busy times tickets can sell out as early as 10:00 AM. Generally, if you're in line by 8:15 AM, you'll get tickets.

Buy a Bono Turistico city pass that includes admission to the Alhambra and to Granada's other top sites. Your appointment time will be scheduled when you buy the pass. Join a guided tour of the Alhambra, available through some of the fancier hotels or through your tourist agent. 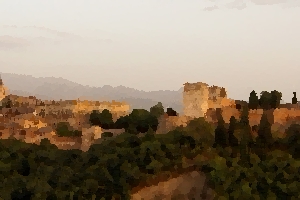 The Alhambra has a standard rating score of 8.3 .