Located right at the center of Serrania de Ronda Mountains, on the edge of the 120 metres deep El Tajo gorge with the Guadalevin River running below is Ronda. Most famous for the Puente Nuevo Bridge, Ronde is an old, charming town in Andalucia, Spain. It is also known to be the town where the modern style of bullfighting found its origins. The town still has a bullfighting ring, Plaza de Toros, which has now been converted into a museum.

The Guadalevin River divides the town into two parts. The northern part of the town has Plaza de Toros, the bullfighting ring. Just opposite to the Plaza de Toros, is the happening part of the town, La Bola – it has everything from local shops to restaurants and cafes. On the south of the El Tajo gorge is the old Ronda or La Ciudad and is home to museums and churches like that of San Sebastián, palaces like Mondragón and Salvatierra and well-maintained Arab baths.

There are several fiestas that take place within Ronda all around the year including Easter in March, Carnaval in February and the Festival of Pedro Romero in September. Ronda also holds an annual “romería” pilgrimage in honour of Virgen de la Cabeza organized by the local Catholics.

One can also visit the Cueva de la Pileta – caves filled with murals – when visiting Ronda. One can also get a tour of a water mine – an imposing example of excellent engineering - when visiting the Casa del Rey Moro in Ronda.

There are no Ronda articles at this time. 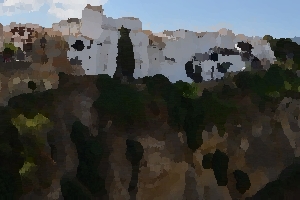