Except for a small opening of the Red Sea, Jordan is generally a country full of land. The borders of Israel and the West Bank are located on the west, Iraq is on the north-east, Syria is on the north, and Saudi Arabia on its south and east. Amman is the capital of the Kingdom of Jordan.

Even if Jordan is only a small country, you will be amazed of the range of climates they experience. The climate is brought about by the altitude with those in the lowest areas like the Gulf of Aqaba and Jordan Valley, which suffers extreme humidity and worst summer heat in contrast with those in the higher areas. Knowing the weather of a particular place before finally visiting it is quite important since the success of the travel mostly depends on how good or bad the climate is. From the months of March to May and September to November, the temperature is not too extreme, making them the recommended months to take a Jordan trip. The end of Ramadan is also the perfect time to visit the country.

Jordan is a relatively small country such that when you are coming from the Syrian border or the Saudi border, you will reach the place in five hours only. With only one domestic flight available coming from Amman to Aqaba, transport is likewise limited. There are no public train service available, only private taxis, service taxis, and buses, which is why hitchhiking is quite a common option to get around the place. This can be a risky way but it has been found out to be a feasible way of moving from one place to another.

Coming to Jordan will never be complete without having the chance to visit the Nabataean city of Petra. Petra is not only the most spectacular sight of Jordan but the whole of Middle East as well. This ancient city is carved completely from sandstone. But there’s more to see in Jordan other than Petra, such as:

- Dead Sea. Known as the lowest point on earth with the most saline or salty sea.

- Dana Nature Reserve. A village that is well preserved since it’s existence in the fifteenth century.

The powerful biblical sites including: the brook where the baptism of Jesus occurred, the fortress where John the Baptist was beheaded by King Herod, and the mountain top overseeing the Promised Land of Jesus as seen by Moses.

Biblical Scenes, Then and Now

Jordan does not only hold biblical scenes from the past since there are many Jordanian men that are still seen in full-flowing robes till this day. There are also a lot of them that continue to lead herds of livestock through the very dry and never-ending desert of Jordan. The sight of men going around the city in robes and beards creates a very heritage-like scene.

There are no Jordan articles at this time. 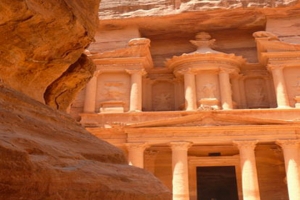