Giza's great pyramids are the most famous pyramids in the world and its site attracts millions of tourists every year. They offer a mix of ancient history and grandeur that is unparalleled on earth. Some of these constructions date back as far as around 3,000 B.C. The Giza pyramids plateau, which is also home to the prestigious Sphinx, is a protected World Heritage Site by UNESCO.

Why they were built

The entire pyramids complex was meant to be a fabulous cemetery for ancient Egyptian royalty and pharaohs. Pyramids were funeral monuments that pharaohs commissioned to honor their memory. Many other tombs made for royal family members surround the pyramids in different areas.

How they were built

The largest pyramids are made of millions of human-carved stone blocks, which is fascinating considering the tools and means of that era. The pyramids were all precisely positioned and aligned so that every side exactly faces the earth’s basic coordinates (North, East, South, and West) at a 90-degree angle. The Ancient Egyptian’s solar-based spirituality appears to be behind the architectural choices made to build the pyramids.

The largest pyramids had an outside limestone layer and a golden top that has been eroded and pieces stolen over the centuries. This originally made the pyramids sun reflective and appear even more glorious. Most pyramids also had intricate passages and chambers stretching deep within their constructions.

The Great Pyramid of Khufu

Giza's great pyramids plateau includes the majestic pyramid of Khufu (or Cheops), which is the last standing monument of the famous Ancient Seven (7) Wonders. More than two million human carved stone blocks were used to construct this pyramid. It possesses an interior passageway that leads to a royal pharaoh chamber.

The Sphinx is about the size of a five-stories building (73x21 meters or 241x69 feet) and is aligned with the middle pyramid of Khafre within the archeological complex.

The famous monument represents the humanization of a lion with the face of either the pharaoh Khafre or Khufu. Usually, Egyptian gods were usually represented by an animal head over a human body. However, for the Sphinx, it is the contrary so, besides its grand size,  it is symbolically special as well. 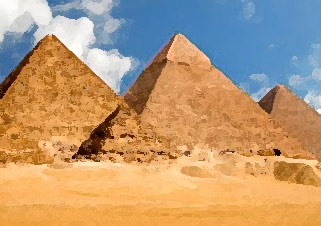 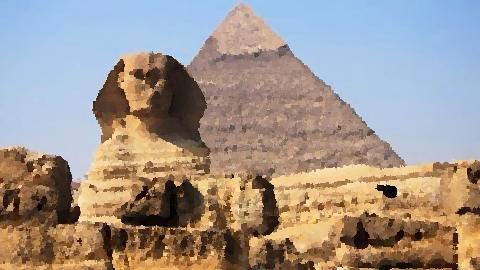 The Great Pyramids of Egypt has a standard rating score of 8.7 with a tourist level of 10 for a responsible rating of 3.7 .