Situated in the westernmost region of the European mainland is the country of Portugal. The country shares its borders with Spain and the Atlantic Ocean. Portugal has once been home to the Celts and the Lusitanians, which have been considered as among the earliest human civilizations that lived and thrived in Europe. The country of Portugal had played a major part in world history, especially during the 15th century. It was one of the countries that had discovered much of the New World, which include the different countries in Asia, as well as Africa and South America. For many centuries, Portugal held a firm grip on these nations which it had made a colony. Eventually, its influence had died and finally handed over the country of Macau, the last of the colonies under its rule, to China in 1999.

Today, the country of Portugal is a highly developed country which has a rich supply of natural resources. It remains to be a primary player in the globalization trend in today’s economy, and continues to provide the locals living in the country a high quality of life.

Because of its location, the country of Portugal is considered as the warmest of all the countries that comprise the European continent. It is a country that experiences hot summers, especially in Madeira Island and cold winters, particularly along the northeast region where the majestic mountain ranges are found. The climate in this country has provided Portugal a breathtaking landscape where a diverse range of flora and fauna thrive.

Majority of the people living in Portugal are Roman Catholics and who can trace their ancestry to the Celts, Lusitanians, Romans and Germans. 95% of the entire population is literate. This does not come as a surprise since the oldest university in Portugal was established back in the year 1290. The standards of this university have rivaled the other prestigious universities in the world that many of the people traveling to the country of Portugal do so to gain a higher educational degree.

The country of Portugal has also become a popular tourist destination for those who are looking for something more on the adventurous side. Apart from the beloved game of football, the Portuguese love their cars. One of the most anticipated events of the year in the country is the annual car rally which is held during the month of April. To get a real dose of adrenaline, head out to the town of Porto for the annual Red Bull Air Race where tourists and locals literally run for their lives as tens of bulls are released across a path that runs through the entire town.

For those who are looking for some place to get away from the hustle and bustle of the city to relax and unwind, Portugal has a number of different spa resorts and natural thermal baths where travelers visiting the country are able to rejuvenate their bodies and their minds. Before you leave, make sure that you stop buy the local shop to take home some of the country’s famous Port Wine.


A castle a day’s how this tourist will play. Portugal is perhaps famous for its over one hundred and fifty castles and forts, all masterfully built. If you only have a week in Portugal, check out some of these architectural 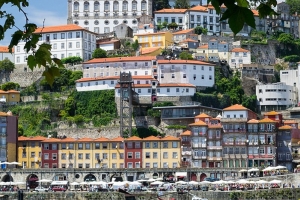