The emperor Napoleon supposedly described it as 'the finest drawing room in all of Europe', and if you visit Piazza San Marco in Venice, it's easy to agree with him. The square, also known as Saint Mark's Square – dedicated to the city's patron saint - is one of the most beautiful public squares in Europe.St. Mark's is also one of the few large squares given over to pedestrians rather than vehicles. It's the only square in Venice known as a piazza – the other squares are technically called campi. Of all the attractions in Venice, this famous square is undoubtedly one of the first places that tourists go see and hang out when arriving in the city.The square has always been the location of most of the Venetian state's important offices and a natural place for marches, parades, and festivals of all kinds. Today, many of the city's most important buildings still lie on or close to St. Mark's – the Doge's Palace, St. Mark's Basilica and clock tower, the offices of the procurators and the Museum of Archeology. The square was first laid out in the 11th century when a canal was cut through the area and then later filled in, creating the shape that remains today. St. Mark's Square is actually not a true square – one side is a little bit longer than the opposite side, an effect that makes the square seem even larger when viewed from certain angles.St Mark's was renovated during the 16th and 17th centuries when new stones with a geometric pattern replaced the old bricks. The new bricks' patterns also added to the illusion of depth and were probably also used to mark the location of trader's stalls. In the late 19th century, the pavement was refurbished again.The square is considered to be the unofficial center of tourist Venice. Many of the best hotels, shops, and restaurants can be found around St. Mark's square, and there is a gondola stop a short walk away. It's a popular place for tour groups and guided walks to meet.Stylish cafes and restaurants line both sides of the square occupying the buildings' lower floors, with their tables spilling outdoors in warmer weather. The square boasts some famous cafes – the Caffé Florian, which first opened in 1720, was the haunt of many famous writers and artists, including Lord Byron and Henry James. 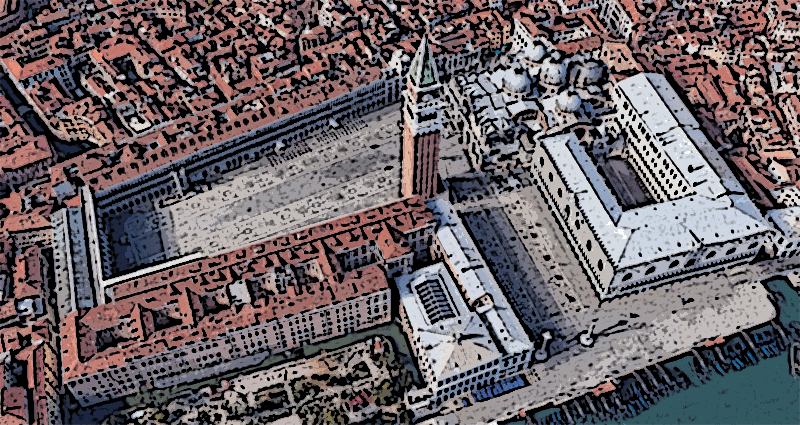 When Austrian troops occupied the city during the early 19th century, they would regularly drink Turkish coffee at the Caffe Quadri. And on a warm summer evening, there is little more pleasurable than sitting at one of the cafes that feature a string quartet for entertainment. Expect to pay a cover charge just to sit down at some of these cafes.And apart from all those other tourists, you will also share St. Mark's Square with thousands of pigeons. It's actually difficult to walk through the square without being attacked by the determined birds. And who can resist buying a packet of seed to feed the birds from one of the many vendors? Most people end up with the obligatory photograph of themselves fending off pigeons.The smaller square between the lagoon and St. Mark's Square is called the Piazetta San Marco and was originally laid out in the 9th century and was once used for public executions. Today, a statue of the lion of St. Mark – one of the city's symbols - watches over the crowds from atop a column.St. Mark's Square is beautiful at any time of the day. Many people choose to visit in the morning when the crowds are not as thick. St. Marks Square and the surrounding canals take on a misty, almost eerie quality in fall or winter. And you may time your visit to be in Venice when the city experiences one of its regular floods. St Marks Square is the lowest point in the city and particularly prone to flooding, and if that happens, you may have to make your way through the square by stepping on wooden boards laid down.But whatever time of day or year you visit, you will agree that St. Mark's Square is undoubtedly one of the most beautiful squares – in one of the most beautiful cities - in the world.

The Piazza San Marco has a standard rating score of 7.2 .