The Villa Borghese is a large natural park in Rome. It contains a few buildings, attractions and hosts the Galleria Borghese museum. Its main entrance is through the upward leading path of the Spanish Steps. 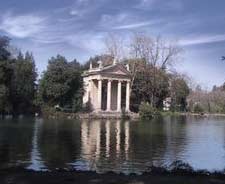 The Greek Temple
The area was a vineyard up until the 17th century. Then Scipione Borghese, Cardinal, and nephew of the Pope Paul the fifth turned the area into a splendid garden. The vineyards of the Villa Borghese were quite famously renowned. Then, in the 19th century, the garden was given an English refinement twist. At the beginning of the 20th century, the park stopped being privately held and became a public place for locals and tourists. 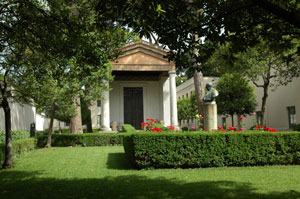 The Etruscan Museum
Flaminio Ponzio built the original villa, Cardinal Borghese's architect. that was named Villa Borghese Pinciana. It is now housing the largest museum in the park, the Galleria Borghese.

Other attractions within the park

Sculptures from famous artists like Bernini, Caravaggio, and Antonio Canova can be found on a raised plateau next to the villa. It is, in fact, a distinct garden called Casino Borghese that displays these artifacts. Camillo Borghese set this up and also displays paintings by Raphael and Titian.

The Villa Medeci contains the French Academy of Rome.

Many other smaller villas found in the park are reminders of the 1911 World Exposition held in Rome.

The Villa Borghese has a standard rating score of 8 .