Campo della Maddalena is one of the most representative squares in Venice, but which most visitors ignore. A small campo that doesn't look like much, close to the busy axis that goes from the train station to the Rialto Bridge.

It's a typical small city square in Venice. A well in the center used to supply water to the square inhabitants with houses all around with their typical high Venetian fireplaces. Entering the campo, you will feel immersed in a historical setting. On one side, you have distinguishable buildings like the Church of Santa Maria Maddalena and the Palazzo Magno with its famous portal. While on the other side, a row of houses typical of Venice's minor building, of very different sizes and colors, embellished by the barbican and the many cylindrical chimneys. A wellhead from the early sixteenth century adds a note of elegant harmony to the elevated field in the center.

Santa Maria Maddalena in Cannaregio, often called La Maddalena, is a church on the campo of the same name in Venice which is located in the sestiere-district of Cannaregio.

By 1155 at the latest, an oratory owned by the noble Balbo family was located on the present church's site or the former family castle, Castel Baffo. After the end of one of the four wars that Venice fought against Genoa, which ended in 1356, the Senate decided to hold annual public celebrations in honor of St. Mary Magdalene. For this purpose, the building was enlarged, and a tower was added, which later became a campanile. On the outside of the apse, there is a 15th century Madonna and Child. The portal recalls the Balbo and probably alludes to their role in the Order of the Templars.

In 1701 the altars were rebuilt at the instigation of the parish priest Francesco Riccardi. In 1760 the building was demolished and completely rebuilt between 1763 and 1778 under Tommaso Temanza (1705-1789). Temanza was inspired by the Roman Pantheon and had a corresponding circular building built with six sides alternating with deep niches and with four side chapels and a choir. Temanza thus created a building that was round on the outside and dodecagonal on the inside. He was buried in the church he created.

During the French rule, the church lost its status as a parish church in 1810, and in 1820 it was closed to serve again as an oratory. There used to be a bell tower which was demolished around 1888. Today the church belongs to the municipality of San Marcuola.

Twelve Ionic columns, symbolizing the apostles, support the dome. Four Ionic semi-columns support the tympanum and the attic. In the portal's lunette, there is an allegorical representation of the Solomonic and the Divine Wisdom. To the entrance's right, the interior contains a painting by Giandomenico Tiepolo, The Last Supper. 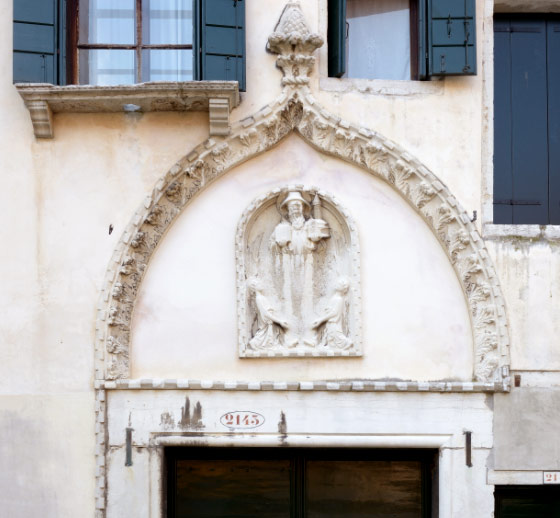 The asymmetrical Palazzo Magno displays a beautiful Gothic portal. It has the relief of St. Magno of Oderzo holding a church and the Gospel, while at his feet, two angels almost seem to hint at the movements of a jubilant dance.

The Campo della Maddalena has a standard rating score of 6.5 .