The Euqestrian Statue of Bartolomeo Colleoni is a bronze monument located in front of the San Zanipolo basilica in Venice, by the Campo dei Santi Giovanni e Paolo . The final artwork is the sequential creation of two sculptors, Andrea Del Verrochio from Florence from 1483 to 1488, and then by Alessandro Leopardi who made the final bronze casting of the statue.

Bartolomeo Colleoni was a famous Italian condottiere of the fifteenth century. From 1454 he served the Republic of Venice with the title of general-in-chief (Capitano Generale). He died in 1475, leaving a will in which he bequeathed part of his fortune, valued at 231,983 ducats, to Venice. A codicil was added to the will. Bartolomeo Colleoni asked that a statue of him on a bronze horse (super equo brondeo) be erected in St. Mark's Square to perpetuate his memory (ad memoriam perpetuara). He had understood that the equestrian statue of Gattamelata made by Donatello in Padua had ensured the glory of the condottiere throughout Italy. Still, he was also aware of how the Serenissima had managed to appropriate the merit. He left 10,000 ducats to the Republic specifically for its realization.

On July 30, 1479, the Venetian Senate agreed to erect an equestrian monument celebrating the memory of Bartolomeo Colleoni. However, it refused to erect it in St. Mark's Square, which, along with St. Mark's Basilica, was at the heart of the city's life, all the more so, as Giles Knox has pointed out, since the Horses of St. Mark, without riders or bits, had become the symbols of Venice's freedom. The square was also the place where the Serenissima's collective ceremonies took place, and the glory of a captain, as powerful as he was, could not be displayed there without overshadowing that of the Republic. The Senate, therefore, decided to interpret the conditions set by Colleoni in his testament without contradicting them, choosing to erect his statue in 1479, not in Piazza San Marco, but in an area further from the city center in front of the Scuola San Marco, on the Campo dei Santi Giovanni e Paolo.

In 2007, after three years of renovation, the statue was returned to this place. 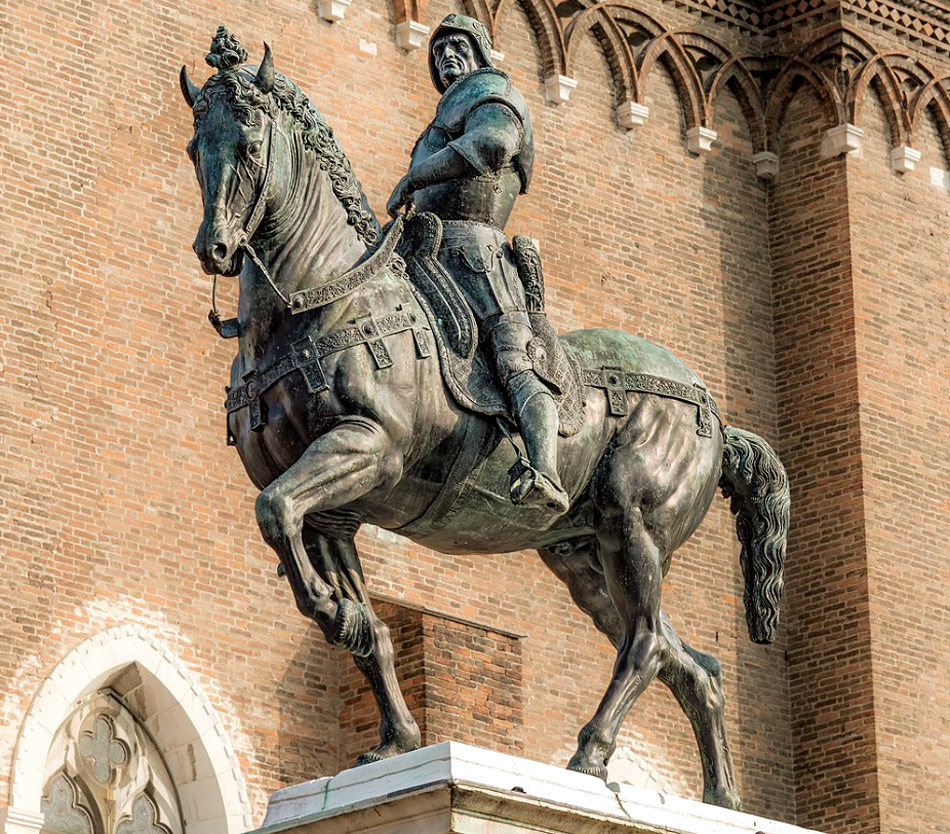 Bartolomeo Colleoni on his horse monument

Verrocchio has taken up Donatello's formula for his Gattamelata: the horse is pacing, both legs moving on the same side. The statue gives an impression of power and tension. The musculature of the horse is treated in a particularly realistic way, and Bartolomeo Colleoni, as Germain Bazin wrote, is represented 'tense, gathering his reins, to launch his mount into battle '. This tension is reinforced by the opposition between the movement of the head and the shoulders.

The condottiere is dressed like a captain of his time. His face is hard and determined, his gaze intense. From the top of his pedestal, he is about to strike down his enemies in a decisive assault. He appears as a leader of men, powerful and determined.

The sculpture overflows its pedestal. According to André Suarès quoted in La majesté des centaures: 'Colleoni on horseback walks in the air, he will not fall. He cannot fall. He leads his land with him. His base follows him. He has all the strength and all the calm. Marcus Aurelius, in Rome, is too peaceful. He does not speak and does not command. Colleoni is the order of the force on horseback. The force is right, and the man is accomplished. He goes a magnificent amble. With the fine head, his strong beast is a battle horse; he does not run, but neither slow nor hasty, this nervous step ignores the fatigue. The condottiere is one with the glorious animal: he is the hero in arms. '

The statue of the Colleoni is marked by the influence of the equestrian statue of Marcus Aurelius: the horse's front leg is raised, the diagonal back leg in movement but still on the ground. It is a 'piaffe going, a nervous gait whose majesty surprises '. According to Nicolas Chaudun, the Colleoni marks statue, like other statues of condottiere of the Italian Renaissance, the apogee of this canon.

It also refers to the equestrian statue of the funeral monument of Paolo Savelli, which is erected in the Church of the Frari. However, it differs from the one in Gattamelata in the animation that has taken hold of the horse and its rider. With its powerful anatomy, the turned head of the animal, its raised leg, and the rider's legs stretched out. At the same time, he stands on his stirrups, looking at his enemies in a violent contrapposto, gives completely new vigor to the equestrian group.

A model for other statues

This statue served as a model for many others. In Paris in particular, at the end of the 19th century, equestrian statues celebrated more canonized or even mythical historical heroes, such as Charlemagne, in front of Notre-Dame, or Saint-Louis, in front of the Sacré-Cœur. 'The time is ripe for revengeful nationalism, and it is the martial and fiery model of Verrochio's Colleoni that inspires these effigies.

The Equestrian statue of Bartolomeo Colleoni has a standard rating score of 6.5 .